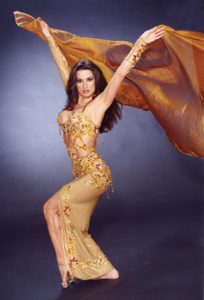 One of the most famous bellydancers in the world, multi-award winning Rania Bossonis has been dancing most of her life. Rania is also fitness instructor and personal trainer (AFAA and NESTA certified), which gives her dancing and teaching a strong focus on body dynamics and correct form.

Rania has teaches and performs multi-ethnic dance all over the world. She specializes in Egyptian and Greek/Turkish styles of Bellydance, as well as Persian Dance. She has won two (2) Bellydancer of the Universe Competition Championship titles, and is internationally considered a master teacher. She was one of the original lineup of Bellydance Superstars, and toured Lollapalooza with the Bellydance Superstars in 2003.

Rania’s style is percussive, graceful, passionate and mesmerizing. She has a deep understanding of ethnic music and the folkloric dances that comprise this art form.

Rania has starred 15 Bellydance Workout, Instructional and Choreography DVDs. One of her titles, Pure Sweat, was chosen by Essence Magazine and the St. Louis Post as one of the Top Ten Workout Videos of 2004. Rania is author of the book, “Bellydancing for Fitness”.
Rania has appeared on television shows such as NBC Extra, CSI Las Vegas, and Bar Rescue, as well as TV shows in Chile, Mexico and Panama. Rania also appeared in the Nancy Ajram video, “Sheik El Shabab”. Rania has been interviewed by Time, Shape and Forbes Magazines.

Rania teaches workshops in the US and internationally, and also offers online video lessons.